Norman Hatch, one of the first USMC combat photographers; who accompanied Joe Rosenthal to the top of Mount Suribachi on Iwo Jima where Rosenthal captured the iconic flag raising on 23 February 1945.

After an agonizing decision by President Franklin Roosevelt, film by Staff Sergeant Hatch (shot on a hand-cranked camera) was edited into “With the Marines at Tarawa.” Its public release is considered to be a watershed moment in public support for, and understanding of the war in the Pacific. It also won an Academy Award for Best Short Documentary in 1945.

I wasn’t able to attend any of the activities for Marine Week in the metro Phoenix area, but I paused to look up at every aircraft that flew over.

One of the closest events was also one of the most poignant for Scottsdale: The creation of a mural at the Scottsdale Civic Center and its dedication to the memory of Scottsdale native, Lance Corporal Jason Hug, by his fellow Marines.

Hug, a combat videographer, and seven other Marines perished in a helicopter crash while the Corps was providing humanitarian assistance and disaster relief to Nepal.

Corporal Sara Medina of Aurora, Illinois, was also killed in that crash, in May of this year. Cpl Medina was also a combat photographer. 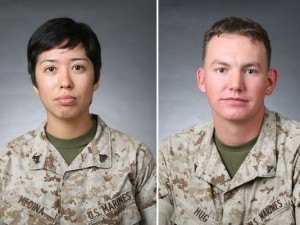 Documenting the relief efforts of the U.S. military on behalf of the international community may not necessarily involve enemy fire. However, it clearly can be equally deadly…and the documentation is important for us here at home to understand and support these efforts in areas where civilian correspondents and photographers can’t always reach.

Is There A Difference Between A Combat Photographer and a Combat Correspondent?

WWII Combat Cameraman: ‘The Public Had To Know’

Which Kills More: Guns or Cars?