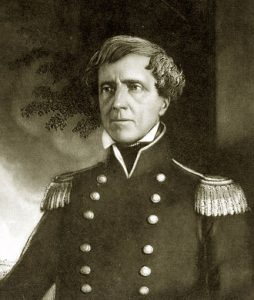 As many Arizonans travel to San Diego for the Memorial Day weekend, I’m reminded of the trek of US Army General Stephen Watts Kearny. General Kearny departed for San Diego from New Mexico in November of 1846, passing through the “Copper Basin” area of Arizona along the Gila River Trail, wherein now lies his namesake town of Kearny in Pinal County.

Kearny had served with distinction in mid-western and western North America. As the commander of what would later become the United States Army’s 1st Cavalry Regiment, he is now referred to as the “father of US cavalry.”

With the Mexican-American War having broken out after US annexation of the Republic of Texas, Kearny undertook the journey to the West Coast to help take control of California.

These troops engaged 150 well-trained CalifornioLancers under command of Andrés Pico (brother of Californio Governor Pio Pico) on December 6, 1846 near present-day Ramona, California, on rain-soaked ground unfamiliar to the US forces.

Kearny’s men were eventually surrounded by Pico’s forces on a hilltop position. However, when their gunpowder dried, they were able to drive away the Lancers. With additional reinforcements from San Diego, Kearny was finally able to withdraw there. The 17 casualties of the Battle of San Pasqual were buried in a mass grave on the battlefield.

Historically, Battle of San Pasqual is viewed as a mixed result, with neither side being clearly victorious. But, in January of 1847, Kearny’s troops, Stockton’s men, and Frémont’s soldiers recaptured Los Angeles, hastening the end of the conflict in California. Kearny later became governor of California.

Kearny’s causalities from San Pasqual were ultimately reinterred in 1882 at what was originally the one-acre Post Cemetery for the War Department’s San Diego Barracks. With the construction of a sea coast artillery battery, San Diego Barracks was renamed Fort Rosecrans, for Union Civil War General William Starke Rosecrans. The brilliant career of Rosecrans would be colored by defeat at the Battle of Chickamauga. But after retirement, Rosecrans would serve as a US Congressman representing California. 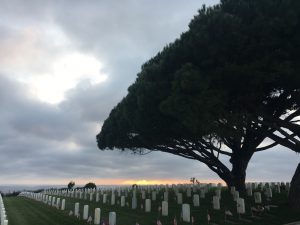