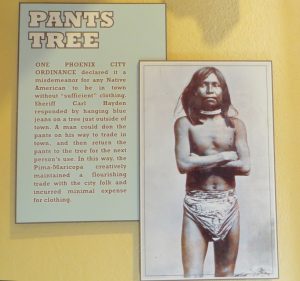 While going down an unrelated rabbit hole, I stumbled upon a post at The History Tourist that included an entertaining image and story of life in the Arizona Territory, reproduced from a display at the Arizona State Capitol.

One Phoenix City Ordinance declared it a misdemeanor for a Native American to be in town without “sufficient clothing.”

Sheriff Carl Hayden responded by hanging blue jeans on a tree just outside of town. A man could don the pants on his way to trade in town, and then return the pants to the tree for the next person to use.

In this way, the Pima-Maricopa creatively maintained a flourishing trade with the city folk, and incurred minimal expense for clothing.

Marshall Trimble wrote about this story in his book, In Old Arizona [excerpted here on the Arizona Oddities blog] along with several other anecdotes about Carl Hayden.

According to Trimble, the “Pima-Maricopa” people to whom the display refers,

… journeyed in on Saturday afternoons to sell their beautifully-woven baskets. The men wore nothing but breechcloths and a smile, something that didn’t set too well with some members of the fair sex.

The Salt River Pima-Maricopa Indian Community is a sovereign tribe located in the metropolitan Phoenix area. Bounded by the cities of Scottsdale, Tempe, Mesa and Fountain Hills, the Community encompasses 52,600 acres, with 19,000 held as a natural preserve.

With two distinct backgrounds and cultures, the Community is comprised of two Native American tribes: the Pima, “Akimel O’Odham” (River People) and the Maricopa, “Xalychidom Piipaash” (People who live toward the water). 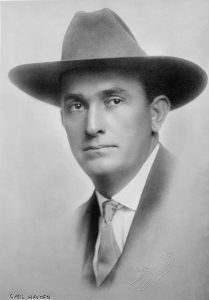 Carl Hayden, the creative peacemaker, was the son of a pioneer merchant and river ferry operator. He was born in 1877 in a mud adobe house on the south bank of the Salt River, where Tempe Town Lake is now located.

Hayden would go on to attend Stanford Law School, but returned home to Arizona one semester shy of graduation because of family illness. Hayden served as a captain in the Arizona National Guard, and as a Tempe city council member. He was elected Maricopa County treasurer, and then Maricopa County sheriff. It is said that Hayden never fired his gun in the performance of his duties.

From local and county elected office, Hayden went on to represent the Territory and the State of Arizona through eight terms in the US House of Representatives and seven terms in the US Senate, for a total of 56 years.

President John F. Kennedy said of Hayden, “Every Federal program which has contributed to the development of the West—irrigation, power, reclamation—bears his mark, and the great Federal highway program which binds this country, together, which permits this State to be competitive east and west, north and south, this in large measure is his creation.” (Wikipedia)

Hayden was born into water, with his family’s ferry business and water-driven flour mill. One of Hayden’s first efforts in national government was lobbying for the Salt River Project that supplies water and power to the Phoenix area. One of his last led to authorization of the Central Arizona Project canal system. He died in 1972 at age 94.

Hayden’s many namesakes include the Carl Hayden Bee Research Center at the US Department of Agriculture’s Agricultural Research Service in Tucson, Arizona (honoring Hayden’s long support of agriculture), and the Carl T. Hayden VA Medical Center in Phoenix (for his service to US military personnel and veterans), adjacent to the site of the Phoenix Indian School (now Steele Indian School Park).