An Eclipse of Two Stars

It is my custom to geographically limit the topics for ScottsdaleTrails to within a day’s drive. However, I occasionally make exception…in this case because the trip began and ended in Scottsdale. And it’s technically a day’s drive, even though it’s a long one.

By astronomical and cartographic coincidence, I was driving southward early Monday morning through the Salinas Valley–the setting for John Steinbeck’s East of Eden–as I returned from the weekend’s historic car races at the Monterey Motorsports Reunion.

Having spent Sunday night in Salinas proper rather than the Bay Area, the map indicated that my shortest route home was southeast on U.S. Route 101 to Paso Robles, then east to Interstate 5.

As the moon started to nibble away at our star, I was miles southward, transiting the lonely intersection of California State Routes 46 (formerly “466”) and 41. Fans of Hollywood esoterica will recognize that fateful confluence as the “James Dean Memorial Junction,” in honor of the lead actor in the cinematic adaptation of the aforementioned Steinbeck opus.

Dean’s own star was eclipsed at that intersection nearly 62 years ago.  He was headed northwest late on a Friday afternoon toward Salinas–from whence I’d come–to race at a track there on Saturday. A northeast-bound Ford sedan turned left in front of Dean’s diminutive Porsche 550 Spyder racecar, “Little Bastard.” The impact was nearly head-on.

Dean’s passenger–Porsche factory-trained mechanic Rolf Wütherich–was ejected and survived, albeit with serious injuries. But Dean’s injuries were mortal. He died moments later in the arms of his friend, Hollywood stunt driver and actor Bill Hickman (The Wild One, Bullitt, The French Connection), who had been following in Dean’s tow vehicle. James Dean was 24 years old.

When I realized where I was, I made a cautious U-turn, and backtracked a half-mile to the Jack Ranch Café in Cholame, California. There in the parking lot, under and around an enormous “tree of heaven” (common name for ailanthus altissima) I found the James Dean memorial; a beautiful tribute in stainless steel sculpture and ground-hugging bronze plaques.

All of the other parked travelers were gazing skyward with astronomical amazement, as I contemplated the moment in history when James Dean’s light dimmed; and how Dean’s legacy became even brighter after the umbra of his death passed by.

I also mused at how Dean might have felt in the moments before his ill-fated Ford encounter; as he cruised along an almost-deserted highway in the autumn dusk of late afternoon, in a marvelous, brand-new, silver sports car.

Behind the Porsche’s vestigial racing windscreen, the wind in the cockpit and the open exhaust with the distinctive, tinny whir of the air-cooled, flat-four lump just behind them would have muted any substantive conversation. So, while Dean enjoyed the comfort of expert company, he would have mostly been alone with his own thoughts.

Perhaps Dean was nervously excited in anticipation of testing of his driving skill on the racetrack the next day; without a thought to the more immediate challenge which would face him just up the road.

With that reflection in mind, I was VERY careful as I turned my own silver sports car back southeastward, lest my own driving skill be tested somewhere along that same slender black ribbon. And I did not stop for a drink at Blackwells Corner store, where Dean got his last Coke.

Post Script, March 19, 2020. Donnie Callaway recently shared this photo, which I believe has been described elsewhere as the last photo of James Dean (and presumably, mechanic Rolf Wütherich). 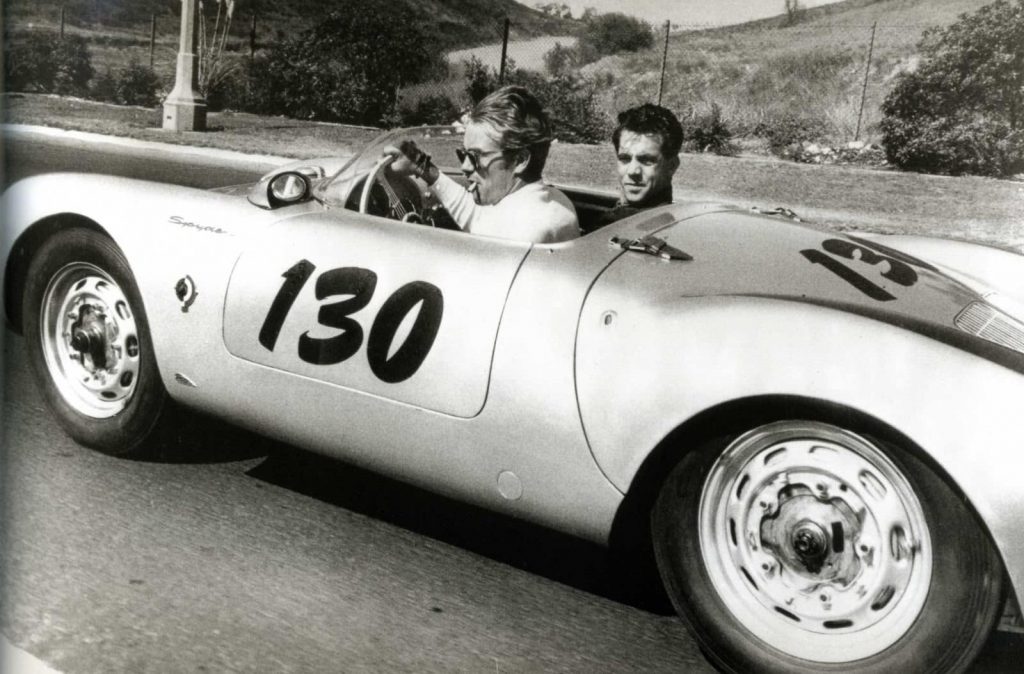 Mike Ryan of Auckland, shared a photo of what he describes as “The only known original poster of the race” in Salinas that was Dean’s destination. A great memento of a sad time.

When Did Theft Become Offensive?

Museum of the West