For most of us, the kooky little town of Quartzite, Arizona is just a fuel stop on the way to LA, and/or the winter motorhome capital of the world. 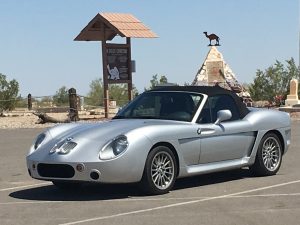 I stopped there myself this morning to fill up, but I also took a very short detour off the main drag to say “Hi Jolly”… which is to say, I visited the Hi Jolly monument at the Quartzite Pioneer Cemetery.

The cemetery is dominated by a low pyramid constructed of (at its base) lava rock, then a layer of petrified wood, a layer of quartz rocks, a layer of bluish rocks I didn’t recognize, and a peak of what appears to be granite, all topped by a metal silhouette of a camel. 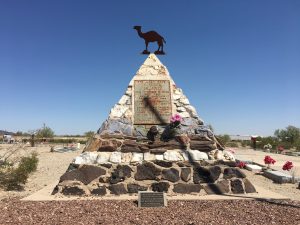 The monument plaque memorializes Quartzite as the “Last Camp” of Hadji Ali (aka, “Philip Tedero”) who came to this country along with a herd of mostly dromedary (“running”) single-hump Arabian camels, under the authorization of then-US Secretary of War, Jefferson Davis

Hi Jolly and his charge were part of the historic (but short-lived) Camel Corps, and participated in the 1857 Beale expedition and survey which established Beale’s Wagon Road. That track would eventually be replaced by one of the most famous highways in modern lore: US Route 66, itself eventually overshadowed by the present-day Interstate Highway 40.

By all accounts, Ali’s camels were far superior to the other US Army pack animals of the day, both in terms of endurance, and load carrying ability. But the onset of the US Civil War and the departure of Jefferson Davis to assume the presidency of the Confederate States of America led to the demise of the Camel Corps. No doubt skepticism on the part of traditional army troops also played a part.

Ali would later work for General George Crook in his pursuit of Geronimo, this time tending mules.

The role of odd beasts from the Middle East in the history of the community (in Ali’s time known as “Tyson’s Well”) is further memorialized by the name of Quartzite’s public transit service: The Camel Express.

…Over thirty years a faithful aid to the US Government…

Hadji Ali was a Muslim, and a Syrian immigrant who became a US citizen.

Scottsdale Republic Is All Hat, No Cattle