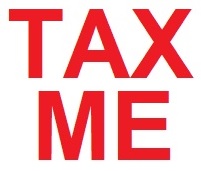 Did you know that in order to raise your own taxes, all you have to do is…nothing?

There’s a Scottsdale property tax election less than a month away, and if more than half the pitiful, typical percentage of Scottsdale residents who show up vote for it, you get new taxes whether you wanted them or not!

Today, Monday 5 October is the last day to register to vote in this important election. See voter registration information at the bottom of this article.

This election is technically a “bond” election. That is to say, it will enable your city officials (elected and otherwise) to borrow money for specified public works projects, via issuing and selling “bonds” that are secured by revenue the city will get by raising your taxes.

What projects? With $100 million in bonds, there’s a long list. I’ll let you review the pamphlet, but I also offer the following:

The question of this election isn’t, “Do the projects have value?” Nor is it, “Do we need the projects?”

Rather, the real question is “Why is the city suddenly $100 million behind in infrastructure maintenance.”

There’s no “suddenly” to it. Mayor Lane and the city council have shorted infrastructure maintenance funding for over a decade, so they can claim a balanced budget (which still required bleeding down reserves); while simultaneously giving no-bid contracts to their campaign contributors, and cash subsidies out of your tax dollars to their friends for Super Bowl parties and polo matches.

Now they are asking you and me to make up for their fiscal irresponsibility by taxing ourselves more…for DECADES.

Yes, Scottsdale is a great city. Yes, her residents have a right to expect top-notch services and public amenities. But we got those through nurturing our physical character to maintain its appeal to tourists, and through fiscal discipline and responsibility. That has never included borrowing money to paint the house, or to change the oil in the car.

If you give Lane and the council more money, they aren’t going to magically be transformed into budget hawks. It will simply become rationalization to continue wasteful spending elsewhere in the budget.

Instead, we should demand that they demonstrate fiscal responsibility FIRST. If we are really in need, they should cut the fat first instead of adding to the highest per capita debt of any major city in the Valley, and the second highest tax burden?

For all of your neighbors to whom you’ll forward this (hopefully) who are not registered voters, today is the last day to register to be able to vote in this important election on November 3. Registration is easy. Just surf over to ServiceArizona to

Many polling places have changed, so look at the back of your election information pamphlet  above your address for your polling place.

If you didn’t receive an election pamphlet, you probably aren’t registered to vote or you need to update your address. They pamphlets have already been mailed, but you can also see it online at http://www.scottsdaleaz.gov/elections).

If you are still on-the-fence about whether to support this debt spending program and you do read the pamphlet, please do so with a critical eye.

I read all the arguments very carefully. Clearly, many of them were scripted. Language referencing “hard decisions” which “had to be made during the recession” appears throughout most of them. Funny, I didn’t see anything “hard” about voting to subsidize Jason Rose’s polo matches year-after-year. You do know he’s Mayor Lane’s campaign PR manager, right?

Some specific comments jumped out at me. Councilman David Smith said, “…now is the time to restore what was lost, rebuild what was neglected, and revitalize what makes Scottsdale unique. Smith was city treasure during much of the ‘neglect,’ and this is his way of giving himself cover for not arguing more vigorously against it at the time.

Pro-bond campaign chair Barry Graham says, “Roads have worn down, paths and parks have deteriorated, and investment in public safety has been deferred.” Who did the deferring? Not the taxpayers. And it’s funny, we didn’t defer $20 million in catch-up maintenance for the TPC golf course which the PGA was contractually obligated to maintain. Oh and we forgave that obligation via council-approved lease amendment. Ditto $2 million to Phil Mickelson, who leases the taxpayer-owned McDowell Mountain Golf Course.

But one of the best arguments against this debt spending program was made by Council member Kathy Littlefield in her pamphlet argument. You will remember that Kathy was against the bonds before she was for the bonds. Kathy’s pamphlet argument is styled as a pro-bond argument, but she says,

After all the years of city government ignoring [infrastructure maintenance] in favor of other, more favored projects, why would anyone think that their attitude will change now?

The Demise of Retail Politics