I’m about to run out of fingers trying to keep track of how many chapters we’ve had to this story. Ryan Randazzo again posts a great article about a new conflict of interest complaint against AZ Corporation Commission chair (and former Scottsdale City Council member) Susan Bitter Smith (and don’t miss Laurie Roberts’s column).

This complaint comes from the self-described ‘conservative’ Arizona Public Integrity Alliance. I’ll let you read Ryan’s article for the details.

But, I was conversing with an astute ScottsdaleTrails reader who asked: Is this a good thing?

What he meant by that is, if the powers-that-be are lining up against one of their own, then is she going to be replaced by someone worse?

As several pundits have observed, Bitter Smith actually had the temerity to suggest that the Corp Comm could be more ‘open.’ Of course, it was probably a self-serving attempt to improve her own public image, but still a pretty smart move even if she wasn’t sincere.

Arizona Public Service (nee Pinnacle West Corporation), who appears to own at least three of the other commissioners by virtue of massive dark money campaign contributions and previous relationships, should have seen Bitter Smith’s position as a smart play for them, too.

And speaking of ‘dark money,’ this is the “Privacy Statement” listed on the Arizona Public Integrity Alliance website:

So, I asked my reader how a Bitter Smith replacement would be determined. Answer: Appointment by the governor, Doug Ducey.

Ducey probably got a taste of the dark money, too, and probably has a bunch of other political favors he hasn’t yet repaid. 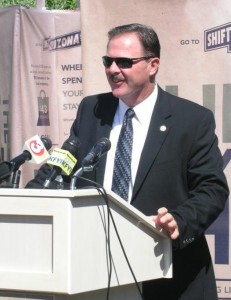 Lane was looking to ride Ducey’s coattails into office in 2014 as State Treasurer. But when he had such a hard time getting re-elected as mayor in 2012 (skipping half the debates; wringing out only 55% of the vote in a primary against virtually unknown opponents; and spending almost his entire campaign war chest to do so), he lost the enthusiasm of the state Republican establishment.

But an appointment…that could be his ticket. Of course, if he wanted to KEEP the seat, he’d have to campaign for it in 2016, but still…

And having him vacate the middle chair at the Kiva would certainly reinvigorate Virginia Korte’s well-known appetite for it.