A couple of days ago a local media outlet put out a ‘story’ entitled, “Rents are jumping in downtown Phoenix, Tempe and Scottsdale as Valley becomes more urban.” A closer reading of the text reveals that it’s nothing more than a regurgitated press release by a multi-family property broker who has a vested interest in continuing to hype the recent apartment building trend.

Worse than that, it’s pretty apparent that the ‘reporter’ didn’t try to provide any sort of context for the data presented, focusing instead on creating some fancy graphs to illustrate a point that is still pretty vague to me. There also doesn’t appear to have been any effort to verify the broker-provided data, with only a single citation: “…according to the outside investor who looks at apartment buildings or other development.”

The “35% increase” in average (I presume) South Scottsdale rents between 2010 ($849) and 2015 ($1147) that appears via hovering the mouse over one of the graphics, sounds like a big number. But when you consider that Arizona property values were near a bottom in 2010, common sense will tell you that rents are merely following property value up the recovery curve.

Now I’m no real estate expert. I did five minutes’ worth of “research” on Zillow…and the reporter who put up this story could have done the same. 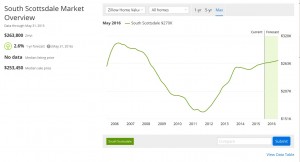 Furthermore, I’m sure that Scottsdale Mayor Jim Lane and the apartment promoters on the City Council will latch onto this article to continue to rationalize their rezoning subsidies and dumbed-down development standards for their campaign contributors.

We already have 10,000 recently-completed or in-the-pipeline apartment units in South Scottsdale. Perhaps the reporter could provide a little additional context with a review of the concept of “supply-and-demand,” and the effects of oversupply on pricing.