1: having little or no value <blue–sky stock>, or,
2: not grounded in the realities of the present : visionary <blue–sky thinking>

I think there are a lot of things in Scottsdale lately that could fit either definition, though the term “visionary” is a bit of a stretch.

However, the application of present consideration is a real estate development by that name. 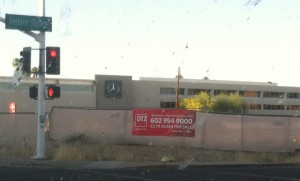 In case you can’t read the sign, it says “High Density, High-Rise Development Site.” Doesn’t sound very appealing considering all the flowery language that developer PR star Jason Rose employed to sell this to Scottsdale Mayor Jim Lane (for whom Rose is the campaign PR manager) and the rest of the City Council, who approved a massive rezoning entitlement for the project.

Blue Sky was the first project approved under state “infill incentive district” legislation, used by Lane, the city council, and city staff to usurp the local control expressed via Scottsdale’s voter-ratified–and ironically, state-mandated–2001 General Plan for development. Blue Sky intended (or pretended) to offer (according to the Arizona Republic in 2013):

…more than 700 units in three, 13-story buildings near the northeastern corner of Camelback and Scottsdale roads. It also will include retail and restaurant space along Scottsdale Road, as well as a penthouse restaurant.

That same AZR article listed an informative timeline in the sidebar:

April 2011 — City Council approves Blue Sky with the conditional-zoning stipulation that it be under construction within 24 months.

The “work on site” consisted of a minimal amount of dirt moving and the construction of a single wall of the parking garage. Sadly, on June 12, 2013, the city council majority voted to end discussion of the reconsideration of whether the stipulation was met. The building permit for the parking garage has since expired.

The fact that this mayor and the city council (who never met a development they didn’t like) were suspicious enough of Gray Development COO Brian Kearney (who appears to have been fired in February 2015) that they put a stipulation on the approval in the first place speaks volumes. And now the suspicions are borne out: Gray Development has given up the pretense of viability and put the dirt (along with several million dollars’ worth of zoning entitlements for height and density) on the market.

Gray was already in trouble, having at the time faced foreclosure on a couple of Phoenix apartment projects. Blue Sky was a considerable overreach beyond organic, market-driven development, and it was emboldened by the infill incentive district concept; as are many of these projects. The Republic quoted:

John McLinden, who owns a condominium at Safari Drive, said Blue Sky is just too big for 4.28 acres, and that fitting it onto the acreage is like “trying to cram 10 pounds of flour into a five-pound sack.” The on-site traffic analysis has underestimated the amount of congestion that will occur on-site, he said.

Across-the-canal neighbor Solis is another example of developer overreach, and it remains a very large dirt lot. 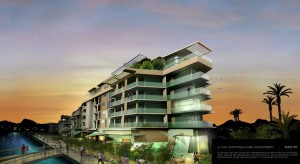 An 11-acre redevelopment site for a planned hotel and condominiums in downtown Scottsdale was sold last week at a trustee sale for $30 million.

AZ-Waters Edge LLC submitted the only bid and will take title of the land northeast of Scottsdale and Camelback roads, said attorney Lawrence Petrowski of Stinson Morrison Hecker LLP, the trustee.

Scottsdale Canal Development LLC, which started assembling the property along the Arizona Canal in 2006, had planned a 240-room Solis Scottsdale hotel and 140 condos on a site that now includes a SRP substation.

Madkour and his investors lost millions of dollars on what was to be a $600 million project.

IMH Financial Corp. of Scottsdale foreclosed on the property in May 2011. AZ-Waters Edge is affiliated with IMH Financial. IMH principals include venture capitalist William Meris as well as Steven Darak, Brian Peterson and James Abood.

Scottsdale Canal Development also lost ownership of a site at 68th Street and Indian School Road it had intended to use for the relocated Salt River Project substation, Madkour said. It paid $7 million for the property.

Blue Sky now has the dubious distinction of being the stick by which bad projects are measured. A June 24, 2013 Republic article reported of the Airpark-area Crossroads East high rise housing project,

“This is the biggest overreach in land use since Blue Sky,” said [Scottsdale city councilman] Guy Phillips, referring to a three-building highrise apartment complex in downtown Scottsdale.

Not only that, but Crossroads East is targeted for a $13,500,000 Scottsdale taxpayer subsidy in the form of bonds and taxes to support “regional flood mitigation,” without which the developer cannot get building permits or insurance. In the last bond package which was defeated by the voters, this same item was called “neighborhood flood control”…but there’s no “neighborhood” there.

I’ll have more on the bonds in an upcoming ScottsdaleTrails article.