In an article I posted last night, I stated that Joe Galli and Loren Molever from the soon-to-be-defunct North Scottsdale Chamber of Commerce had called Scottsdale City Councilman Guy Phillips (at the time a candidate) a “communist.” That statement was not technically accurate.

Mr. Molever sent me an email last night in response to my article, in which he appeared to object to my assertion:

Having the knowledge of the this current situation that I do, and which you lack, I find your ignorant conjecture humorous. But, on a more serious note, can you point out to me where and when and in what form I ever called anybody a communist?  You may want to ask your lawyer to help you look for that.  Please let me know by 5 o’clock Thursday.

(Would you guess he’s a lawyer?)

As reported in an Arizona Republic article from October 24, 2012,

North Scottsdale’s BizPAC, a committee funded largely by the North Scottsdale Chamber of Commerce, paid for the 30-second commercial that has aired on television stations and YouTube.

“Guy Phillips, he seems harmless,” the ad begins, “But for years, Guy worked against local business owners and job creators, claiming they want to ‘exploit Scottsdale.’ ”

The ad also claims Phillips “promised to show us a Scottsdale without selling out to ‘greedy capitalists,’ ” with a communist hammer and sickle next to Phillips’ photo.

Phillips is a former member of the non-profit chamber, which supports and promotes businesses in north Scottsdale.

Of course, that would beg a question as to their competence in their roles as executive director and chairman of the board of directors. I would never go so far as to say Mr. Molever might have been “ignorant” of the actions of the BizPAC, but one is led to wonder…

I note, however, that the chairman of the North Scottsdale BizPAC listed on the “Statement of Organization” they filed with the Scottsdale City Clerk is…surprise! Loren Molever! 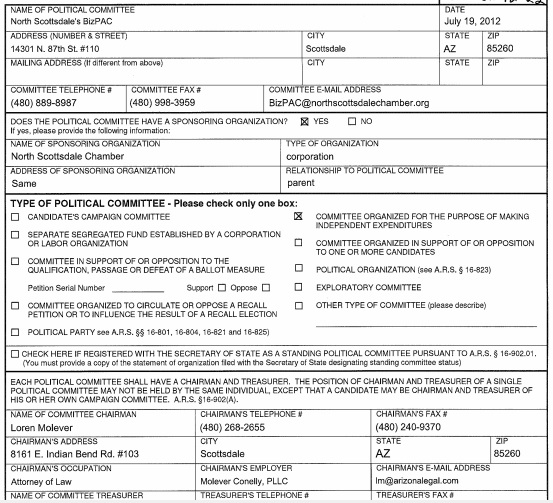 So perhaps Mr. Molever’s objection is that I used the verb “called,” when I should have used “labeled;” or perhaps he objects that I am conflating the use of a hammer-and-sickle emblem next to a photo of someone with actually using the word “communist.”

A more accurate statement for me to make would be that,

“Mr. Molever was the chairman of a political committee that authorized and paid for a television advertisement in which a ‘hammer-and-sickle’ emblem (used as a symbol of various Communist organizations) was positioned adjacent to an image of city council candidate Guy Phillips.”

I also note with some minor amusement that the first “benefit” of membership listed on the soon-to-be-defunct North Scottsdale Chamber website is:

Gain Credibility, Improve Your Reputation – A nationwide study by the American Chamber of Commerce Executives (ACCE) showed that nearly 60% of consumers think being active in a Chamber is a good strategy, and being a Chamber member is 30% more effective for communicating to consumers that a company uses good business practices and 26% more effective for communicating that a business is reputable [emphasis added].

Join Today, and start realizing the impact of being in our community’s powerful business association.

I wonder how Molever’s fellow board members (below) feel about their “reputation” now?

Mr. Molever, I welcome any feedback you’d like to offer to help correct my “ignorant conjecture.” Feel free to comment below, and I will publish your comments without edit.