In case you haven’t seen all the “Yes” signs posted around town, there’s a city bond election coming up next month. If you are on the Permanent Early Voting List, you should be receiving your ballot by mail in the next couple of days.

What is a bond election? It is Mayor Jim Lane and the Chamber of Commerce majority on the Scottsdale City Council asking you to co-sign on almost a quarter of a billion dollars in loans…and for you to trust that they’ll spend the money the way they’ve SAID (but not promised) they’ll spend it. They want to borrow a bunch of money which you will have to pay back with decades of higher property taxes.

Many of the bond items are make-work projects for their friends. A few are being done to help developers build on land where we never intended to have development.

There are a handful of good projects within the package of 39 the Mayor and Council are asking you to fund…but you can’t vote for them separately because all 39 items have been arbitrary ‘categorized’ into four groups, with only a couple of good projects in each one. In order to get the few good ones, you have to approve a BUNCH of bad ones.

If all that weren’t bad enough, now they’ve sent out a mailer that’s just plain dishonest.

As you probably know, Kathy Littlefield formed the Keep Scottsdale Special group to help defeat the bloated bond burrito and try to bring back the leaner, cleaner, and more transparent package which we requested of the Mayor and Council.

However, the “Preserve Scottsdale’s Future” group has printed in large type on the front of their brochure “Keep Scottsdale Special.” This is a dishonest effort to confuse you and make you think that WE support their spend-and-tax efforts. 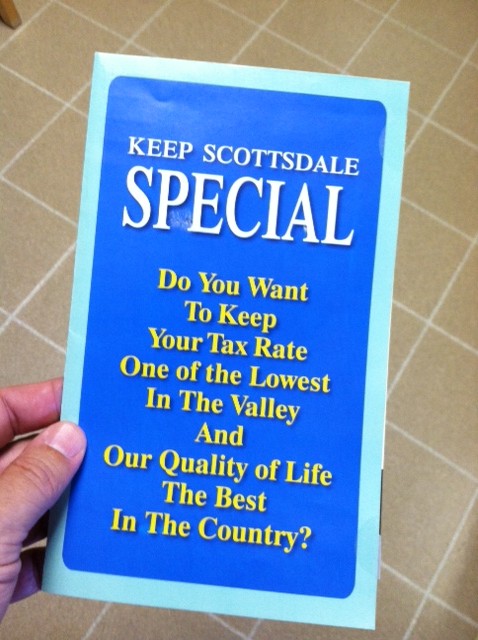 Furthermore, they go on to say these bonds will “…keep your tax rate the lowest in the Valley.” Well, the “rate” may be low, but we actually have the highest per-capita property taxes of any major city in the Valley. How can they say that?

They can say it because they aren’t telling you that our assessed property values are also the highest. If you multiply the higher value by even a moderately higher “rate,” you get big property taxes…and this bond package will increase the city’s portion by a whopping 35%!!!

This committee heaps insult onto injury by inserting Mayor Jim Lane’s high school yearbook photo and a statement that these bonds, “…will build and re-build the strong infrastructure Scottsdale needs…”

To that point, I remind you that Mayor Lane has been on the council for a total of almost nine years. If we need to “re-build” anything, it’s because of his neglect and the neglect of his colleagues (other than Bob Littlefield and Guy Phillips, of course).

I urge you to heed this dishonesty, and vote NO on these bonds. Force the city to follow the priorities laid out by THEIR bond task force, and give us a bond that respects our intelligence.

For more information on the upcoming bond election, please visit: