The Scottsdale City Council voted tonight for (among other things) tentative approval of the FY2013/2014 budget.

This year’s budget includes a structural deficit (i.e., planned, as opposed to actual, which we won’t know until the end of the fiscal year next June) of $9.4 million.

What is a deficit? That’s when expenditures exceed revenue.

Then how can the City Council call this a balanced budget? That’s because they are using “balanced” as an adverb instead of an adjective. In other words, they “balanced” the budget by dipping into savings.

Look at this chart from city staff. See the line that says, “Unrsvd Funds Appld     9.4.” That’s accountant-speak for transferring $9.4 million from our savings account. 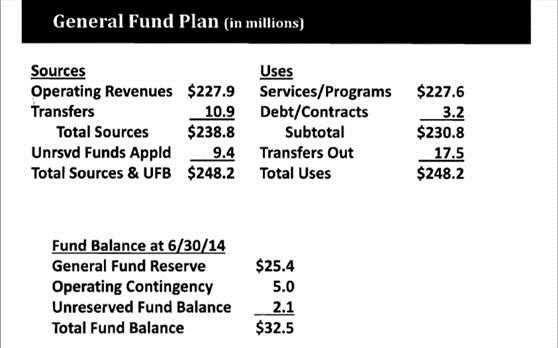 Thank you Councilman Littlefield and Councilman Phillips for voting against this turkey. It’s stuffed with fluff like $4 million to the Scottsdale Cultural Council (a private business), and millions more to the Super Bowl ‘host committee’ (whatever that is), the Professional Golfers’ Association, and polo matches for Jason Rose (the mayor’s campaign PR guy)…meanwhile shortchanging core public services like police, fire, and roadway maintenance.

I will remind you that “Republican” Mayor Jim Lane and the “Republican” majority on the council also voted for an $8 million deficit last year. We have yet to see where we’ll wind up on actual receipts and expenditures.

And, Lane & Co. want to borrow almost a quarter of a billion dollars via bonds on the ballot in November.

“My Turn” on the Entertainment District

Inattentional Blindness and the Art of the Pickpocket