Thanks to @SEALofHonor, @ArizonaNewsnet, and @cstanderfer for reminding us via Twitter that today marks the 68th anniversary of the raising of the flag of the United States on the summit of Mount Suribachi, Iwo Jima (EE-woah, JEE-mah), high point of the volcanic Pacific island stronghold of the Japanese 31st Army.

“Iwo” was the first territory of the Japanese homeland to be invaded by the US. It was heavily fortified and almost ideally defensible for the 22,000 determined occupiers, who faced certain defeat from naval artillery, aerial attack, and amphibious assault by 70,000 U.S. Marines, U.S. Navy corpsmen and sailors, and U.S. Army Air Forces airmen and nurses.

In the end, the defenders exacted a terrible toll of almost 7000 Americans killed in action (10%) and almost 20,000 wounded (nearly 50% killed or wounded). However, the Japanese paid the higher price, with a casualty rate of 99% killed. All but 216 of the 22,000 defenders were killed or missing.

Joe Rosenthal‘s photo of the second flag raising on Iwo became a symbol of the war, and sadly, the dichotomy of victory and sacrifice. Of the five Marines and a Navy corpsman in the photo, only three survived the Battle of Iwo Jima, which was far from over when the flag was raised.

Arizona’s own Ira Hayes (1923-1955), a Pima Native American of the Gila River Indian Community was one of the survivors. Hayes was haunted by his experiences for the rest of his life.

USMC Staff Sergeant Lou Lowery (1916-1987) captured the first flag raising in an image perhaps more accurately reflecting the heat of battle that continued to rage around the subjects of his photograph. It was Lowery who steered Rosenthal to the top, where Rosenthal snapped his summit shot as the first flag was replaced by a second, larger flag. 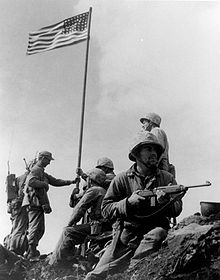 Ironically, Joe Rosenthal (1911-2006) was rejected for enlistment by the US Army because of poor eyesight. Rosenthal was on Iwo on 23 February 1945 as a civilian photographer for the Associated Press. Wikipedia says of the iconic image,

Later, it became the only photograph to win the Pulitzer Prize for Photography in the same year as its publication, and came to be regarded in the United States as one of the most significant and recognizable images of the war, and possibly the most reproduced photograph of all time.

However, Rosenthal was quoted later in life, “I took the picture, the Marines took Iwo Jima.”

Read the fascinating story of raising the flag on Iwo at Wikipedia. You can help our wounded Marines of today by visiting the Semper Fi Fund.