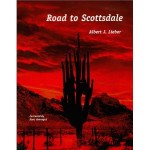 Robert Leger recently ran an AZ Republic column in which he took issue with a decade-old book by Albert Lieber called “The Road to Scottsdale.” In the book, Lieber, mourns for the Scottsdale of his memory, some 40 years distant from then and 50 years from today.

Leger dismisses this as “…wax[ing] nostalgic for a Lost Atlantis…” and then proceeds to lump into the same category every person in present-day Scottsdale who disagrees with the Chamber of Commerce definition of “progress.”

This provided me an opportunity to really think about the best way to counter this typical traitor-mongering argument. I posted my response to his column on AZCentral. However, I feel it is so important to counter this growth-at-any-price mentality that I’ve copied my post here as well:

The biggest difference between virtually ANY time in the past and today is that we are now smart enough to know that progress has a price. And we are dumb enough to ignore or not even bother to calculate that price.

Every zoning decision should be accompanied by such a calculation, rather than a one-sided “rah-rah” from the Chamber of Commerce, the planning staff, Mayor Lane, the City Council, and the Arizona Republic.

It’s not like we don’t know that development doesn’t sustain itself. We can’t say “we forgot” that infrastructure lags growth. We know the purpose of zoning even if we choose to ignore it.

The biggest question I’ve been asking for years is, “What makes Scottsdale special?” It isn’t mild winter climate, golf, or nightlife. Many places (including virtually ALL of our adjoining cities) have those things. What differentiates us from them?

I know what makes Scottsdale special to me. That may be different from what makes it special to you. One thing we ALL know is that Scottsdale IS special. Do any of you think it will stay that way if we don’t try to define why it is so and use our brains to make sure we hang onto that?

NO ONE says that Scottsdale can, will, or should stay the same as it is right now, let alone go back to days passed. I hope it will be BETTER. Does “better” equal “bigger?” Not in my dictionary.

Scottsdale is a better place today for all those who opposed senseless change, who made elected officials and bureaucrats plan more palatable solutions for growth, and reminded them mercilessly about the projects that offended our sensibilities.

Robert, where you see cries for better as opposition to the inevitable, I see community-minded residents who understand something you do not.

Scottsdale doesn’t need to be downtown Phoenix or Mill Avenue in Tempe. With apologies to Walter Tevis, Scottsdale needs to be itself…on purpose.

I haven’t read Lieber’s book yet. But, thanks to Leger’s column I just ordered it and will share my thoughts when I get a chance to spend some time on it.

The reviews on Amazon seem largely positive, though, and that’s more than can be said for much of the coverage of these issues by the Republic.

Oh, and did I mention that in addition to having authored a fine book on the price of progress, Lieber has a PhD in Nuclear Physics? Maybe you should pay attention to what he has to say, Robert.

GP Task Force: The Other Side