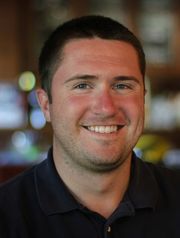 In a letter published in today’s Arizona Republic, Drew Sexton claims (among other things) that

The [Valley Metro] light rail is a great, cost-effective investment not just for Millennials and our public transportation system but for the future of education in our city. [Phoenix’s] Prop. 104 builds on that investment and should have our support.

Commenter Rick Mueller posted this response, which I reproduce here because I couldn’t have said it better myself:

Hahahahha …. the clown doesn’t even pay taxes but he wants subsidized public transportation. He will learn when he grows up.

I would add a couple of points, however. The geniuses on the editorial board at the Republic (including ex-Scottsdale Republic resident journalistic genius Robert Leger), let Sexton’s letter go to press with only the postscript, “Drew Sexton is an account executive at HighGround.”

Before founding HighGround, Coughlin was the Deputy Chief of Staff for Governor Fife Symington. He was responsible for day-to-day management and implementation of all media, legislative and community relations programs for the Administration. Prior to joining the Governor’s staff, Coughlin managed the Governor’s 1994 re-election campaign. The Governor won re-election with over 54% of the popular vote despite being down by a 28-point margin six weeks prior to Election Day.

Prior to joining Symington, Coughlin was the Regional Government Relations Manager for Waste Management of North America (1992-94), Director of Public Policy and Legislative Affairs for Attorney General Grant Woods (1990-91), Senior Account Executive for Nelson/Ralston/Robb Communications (1988-90), Director of Government Relations for the Mesa Chamber of Commerce (1986-88), and Finance Director for McCain for Senate (1985-86).

I don’t think it takes a degree from the Cronkite School (which Sexton brags about attending) to prompt one to ask if HighGround is getting paid to do any lobby work for light rail concerns. But clearly that question eluded Mr. Leger. He (Leger) once told me when I complained of factual errors in an opinion column he published that was authored by Scottsdale Mayor Jim Lane, “It’s the opinions page, and that’s his opinion.”

And to expand on Mueller’s point a bit, light rail drum beaters frequently ignore the fact that our bus routes are also a component of our transit system. Light rail subsidies originate in large part from cannibalizing the bus routes. So folks who live, work, and/or study along the light rail route are subsidized at the expense of those who do not.

Voice of Scottsdale Shoots Both Feet