As I recall, the program was ‘sold’ by its vendor (American Traffic Systems, aka “ATS”)  as a more efficient (i.e., nabs more speeders at lower cost to the vendor) school zone speed enforcement tool. In fact, a staff report to the Transportation Commission about ATS’ city contract actually calls them “Portable School Towers.” Blais reports that

…the phone booth-sized mobile machines will be rotated between the city’s 31 school sites starting July 21 [2014]. 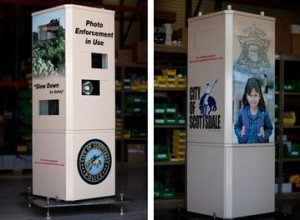 However, it didn’t take long for the program to morph into a bigger scope, which will generate more profit for ATS. From Blais’s report:

When school isn’t in session, the mobiles will be moved to other high-traffic areas for pedestrians, such as parks, pools, shopping areas and sports fields.

I’ve detested photo enforcement since it was first implemented in Scottsdale. On the other hand, I used to tell other opponents of this technology that if you can’t see a photo enforcement van in time to slow down, you are driving too fast or too inattentively.

And you certainly wouldn’t see a child on the sidewalk prepared to unwittingly step out in front of you. As if to prove that statement, ATS has put a life-size image of a child on one side, albeit 2-dimensional, not animated, and placed against a background that breaks up the outline. Thus it’s much harder for your brain to process and recognize.

However, I firmly believe that the safety impacts are not nearly as great as city staff and police department administrators have represented. I’ve challenged Scottsdale Public Safety Director (and Chief of Police) Allan Rodbell to point to valid statistical analysis to justify statements like the one given to Blais by SPD:

You don’t have to be a rocket scientist to see that this ‘analysis’ does not control for a lot of other factors which could have huge impact on the collision rates, like overall improvement in roadways, traffic controls (lights, etc.), vehicles, and driving habits.

Even by controlling–or ‘baselining’–for factors like this, a gross generalization which compares city-wide population change to city-wide collision rates has no statistical validity for justifying specific traffic control solutions at specific locations. In other words, a specific rate of collisions at a specific roadway location, both with and without photo  enforcement at that location.

Photo enforcement MAY be a good tool for traffic speed control, and it may even be a good tool  for reducing collisions. But being dishonest and unethical about the science will always leave it open to question: Is this simply a program about which the politicians and bureaucrats can pat themselves on the back, and to enrich private business at the expense of drivers who may have never even been involved in a collision and never would?

“My Turn” on the Entertainment District