Why Less Was More For Tony Nelssen

The worth of a person is measured mostly by their deeds rather than their words.

In my humble opinion, the greatest among us say more with fewer words, which ensures that those few words have greater impact. Less is more.

I think “less is more” applies to the desert, too. Sparse natural resources should teach us about the economies of living if we’d pay attention. It would also teach us that what applies to us individually, also applies to us collectively through our land use planning and development.

“Sprawl and tall” erode our appreciation of, and connection with our desert home. I believe we should make our development count by ensuring quality and thoughtfulness of design, and by how it connects with its context.

Tony Nelssen was a man who appreciated the “less is more” theme of the Sonoran Desert. Tony’s family has been in this area since the turn of the last century – and by that, I don’t mean 1999.  He knew that the folks who came here from other parts of the world didn’t have enough historical connection to respect the desert. Thus, they could not know that their vision of urban living would not be successful and sustainable in Scottsdale.

In keeping with “less is more,” Tony was also a man who tended not to say a lot. One of the best conversations I ever heard on development in Scottsdale was also one of the shortest. Tony was challenged by a political rival over some development issue, which caused Tony to question the man, “How long have you lived here?”

Not that Tony didn’t like tourists…he loved them as do most of us who enjoy our quality of life that is funded largely by tourism.

Rather, my takeaway is that tourists should observe and enjoy before they start trying to change things! 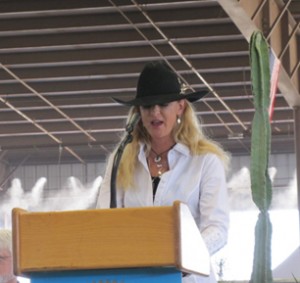 Yesterday’s naming ceremony of the Tony Nelssen Equestrian Center was touching and appropriate. I already shared Bob Littlefield’s comments from the event. Marg Nelssen was kind enough to allow me to share her comments as well:

I have a lot of thank-yous to express today (and I promise brevity or 4 minutes which ever comes first!) I’d like to begin with a Thank you to Mayor Lane, Vice Mayor Littlefield, who had the idea to put Tony’s name on the Equidome, Scottsdale’s Poet Laureate, Bob Frost, West World General Manager Brian Dygert and his staff. Also, Scottsdale’s Mounted Unit and staff, specifically Sergeant Bryan Brown and Officer Chet Anderson, who not only picked up Tony’s favorite mule on Tuesday, but cared for and pampered her for today’s ceremony. It’s very true that Peaches needed a bath! Thanks also go to Barbara Dietz of the Scottsdale Classic Futurity and Quarter Horse Show – by happy non-coincidence opening today, for all your generous hospitality.

More thanks go to our Scottsdale City Council members and a supportive staff and public for approving the renaming of West World’s Equidome to what I think we’ll all just start calling TNEC. Some of you probably didn’t know that Anthony was actually Tony’s middle name. But I’m pretty sure he wouldn’t want us naming it the “Eugene Anthony Nelssen Equestrian Center” anyway. And, of course, thanks to everyone here for showing up. If I’ve left anyone out, I apologize.

A few months ago I was asked about planning for today’s celebration. My 3 requests were to schedule at everyone elses’ convenience, that we keep it simple and short, and that Peaches attend. And, I hope I’m not going to be the one to mess up that middle part.

So, not sure how really simple all of this was for everyone, but thanks indeed.

If you knew Tony, maybe even if you didn’t, you will see his heart in many places in Scottsdale. And, as I was reminded this week, his heart is also evident in some of the projects you do not see. (Thanks John).

Hannah, Ian and I, and the whole Nelssen family, are humbled by the honor of attaching Tony’s name to what already has been an outstanding event center, but also to what we know will surely become a premier facility, not just for Scottsdale or even Arizona, but the premier year round event center in the entire country.

Safe bet is that Tony is pleased (probably a little chagrined, too) but mostly happy and thankful, and not as much for himself, but for the City for which he carried such passion and persistence.

West World’s expansion is so good on so many levels for all of Scottsdale and Tony would have been one of its biggest cheerleaders. It’s what we all should continue to be.

So really, just one more thank you to finish then. Honest!

TNEC : The Tony Nelssen Equestrian Center. For all of everyone’s past, present and future efforts, for the remembrance of a life so beautifully lived and for the city so beautifully loved; I want to say another heartfelt Nelssen family thank-you. 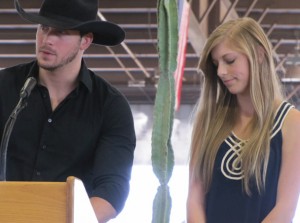 The last piece of the ceremony I’d like to share with you is the quote shared by Tony’s children, Hannah & Ian. Attributed to Tony’s favorite Rough Rider, Teddy Roosevelt.

It is not the critic who counts; not the man who points out how the strong man stumbles, or where the doer of deeds could have done them better. The credit belongs to the man who is actually in the arena, whose face is marred by dust and sweat and blood; who strives valiantly; who errs, who comes short again and again, because there is no effort without error and shortcoming; but who does actually strive to do the deeds; who knows great enthusiasms, the great devotions; who spends himself in a worthy cause; who at the best knows in the end the triumph of high achievement, and who at the worst, if he fails, at least fails while daring greatly, so that his place shall never be with those cold and timid souls who neither know victory nor defeat. 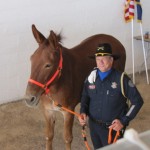 As Ian explained, Tony was definitely the man in the arena. While he is surely missed by many of us, we are proud to pay tribute to him with this facility that he enjoyed so much.