Yes, I omitted the “C” on purpose.

I watched the Planning Commission meeting last night on my computer via webcast. I missed the first few items, which will be presented to the Airport Advisory Commission in a couple of weeks (I will be writing about them before and after), then to City Council on October 25 along with the last item: The General Plan Update. I’m going to forgo discussion of the earlier items for now and focus on that last one.

The General Plan Update is moving along toward adoption by the City Council, then to be placed on a spring ballot for approval or rejection by the residents of Scottsdale. This update process has been ongoing for a couple of years and has been riddled with controversy.

Besides our City Charter, the General Plan is perhaps our City’s most important guiding document for land use and public process. I’ve written on the General Plan and the Update before so I will spare you the details here. There are some serious changes in this update that will alter the physical character of Scottsdale. Throughout the process of crafting the update, City Manager David Richert and his staff have taken a very pro-development approach, and have all but ignored resident concerns. Last night was a perfect display of this attitude. 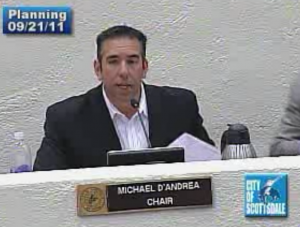 Again, sparing you the tedious details, the night was pretty much summed up for me in the last few minutes of a long and frustrating spectacle. The chairman of the Planning Commission, Michael D’Andrea (nominated to the commission by Mayor Jim Lane) commented very favorably toward staff and their inputs, and negatively toward citizens addressing concerns to the Commission.

In what has become a familiar pattern of slanting the tone of the proceedings to be more favorable to the goals of the staff (and apparently of the Commission), D’Andrea paraphrased aloud a written comment card (from someone who could not attend) in support of his position, and a member of staff relayed verbal support from a citizen who put in a card to speak at the microphone but had to leave before his turn to speak.

I know for absolute fact that D’Andrea’s paraphrase inaccurately portrayed unqualified support for a portion of the GP update, when what it really was expressing was support for simply INCLUDING consideration of that component. Chairman D’Andrea offered this paraphrase as direct rebuttal to a public comment from concerned resident Howard Myers.

Further, for either the chair or a staff member to read or relay non-verbal comments to support their positions is entirely inappropriate given that MANY written NEGATIVE comments were submitted for inclusion in their agenda packet and they didn’t read even ONE of those.

As I said earlier, this has become a pattern where staff, board and commission members, and even city council members have disingenuously mischaracterized the balance of public support vs. public opposition. This has been true not only with the GP Update process, but with virtually ALL controversial land use decisions that have been made in the last couple of years.

For staff to do this is a violation of public trust. Senior Assistant City Attorney Joe Padilla was in the meeting as well, and for him to permit it is even worse.

Anyone in attendance at the Planning Commission meeting and anyone watching on TV or via streaming broadcast would get the impression that the concerned residents were just a few lone cranks and complainers. Unfortunately for the vast majority who aren’t more closely involved in city politics and processes, that is a sadly mistaken impression. Those who came to the microphone to speak have invested hundreds of hours reviewing the proposed changes and making suggestions for improvements. I will give staff credit, many of those changes have been incorporated. However, some of the most important changes have been completely ignored or dismissed through processes like what occurred Tuesday night.

It’s time for REAL reform of our Boards and Commissions. And here’s what I think should be done. What do you think?