Light rail is one of those topics that can be like touching the third rail: Bring it up and fireworks will ensue.

The Chamber of Commerce and their supporters on the City Council have been pushing for light rail in Scottsdale for years. A connector spur from Tempe was seen as a vital to ASU Foundation fulfilling the promise of SkySong. There’s been a lot of behind the scenes (and some more transparent) talk about running the line up to the Scottsdale Airpark, and I’ve even seen plans to run it all the way to Carefree.

A few years ago a handful of us ‘community advocate’ types were successful at raising awareness of the cost and impact of light rail in Scottsdale. The benefits included very slightly shorter commute times (on the order of 10%). However, impacts include excessive capital costs ($110,000 per round-trip rider), ongoing operating losses (on the order of 4-5 times fare collections) that have to be subsidized by ALL Maricopa County taxpayers, tremendous negative economic impact of construction on surrounding business, elimination of motor vehicle lanes in areas where street width is restricted by buildings (e.g., downtown Scottsdale), and–ironically–higher pollution because the rail crossings create engine-idling delays for vehicular traffic.

When confronted with these seeming crippling facts, light rail proponents (including former Mayor Mary Manross) said that light rail isn’t about transportation, it’s about development. Aha! Now we get the real story. Light rail is about artificially creating property value along the line. Indeed, some property owners in Tempe especially have made out like bandidos with high-density condos and apartments on Apache Blvd. No wonder the big money is on light rail!

The topic of light rail has somewhat dropped off Scottsdale’s radar. So, why bring it up now? Being off the radar doesn’t mean it is dead…not by a long shot. I was reminded of it recently when I saw this piece on AZ Central: 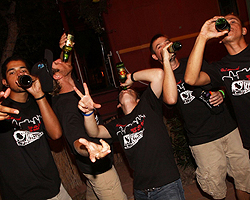 Hop from bar to bar in the air-conditioned comfort of the Metro light rail. The third annual Tour de Light Rail Pub Crawl returns, benefiting the Arizona Hemophilia Association. Participants will ride to four destinations in Phoenix and Tempe, sporting special Tour de Light Rail T-shirts and enjoying drink specials. The crawl starts at the George & Dragon in Phoenix, where Washington Apple shots will cost $2.50, and end at Macayo’s Depot Cantina in Tempe for free appetizers, live music and a raffle.

I thought to myself, “Really? Is this the ultimate value of $1.4 BILLION dollars’ worth of Light Rail?” I posed the question to my friend Chris Schaffner, who asked in reply, “What is more noble than transporting drunks from bar to bar?” (He was being sarcastic).

How would you like to be a light rail commuter going to work in a business dress or a nice suit the next day on one of the cars that carried these folks?

However, I can imagine we’ll hear someday soon about how light rail will be the solution to the City Council-created problem of traffic and noise around the ‘entertainment district’ in Downtown Scottsdale.

You can read more information about Phoenix Metro Light Rail on Wikipedia. Don’t expect many contravening facts there, though…the entry was obviously written by a ‘friend’ of light rail.

Here’s an AZCentral article on “modern street car,” which is a nostalgic and more palatable name for the less capable cousin on light rail.

Another recent AZCentral article talks about the need for private security on the light rail system.

Developers Are People, Too